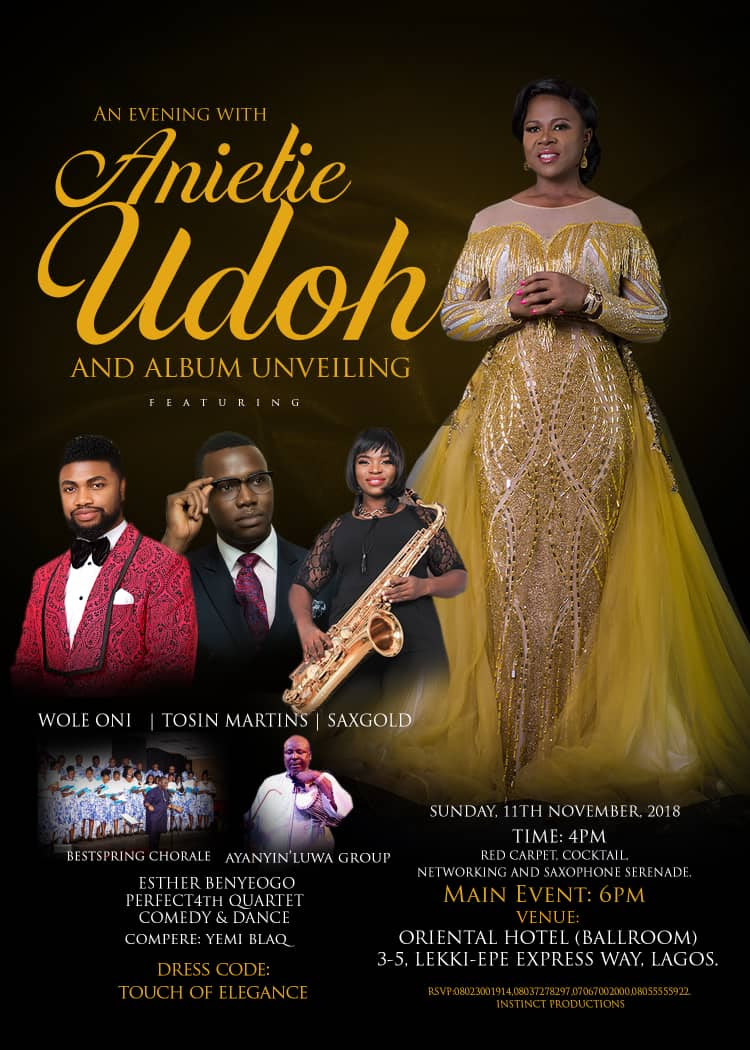 Gospel music minister and business expert Anietie Udoh is set to unveil her 3rd album with a touch of elegance as she host the event – “An Evening with Anietie Udoh”.

Headlining the event alongside Anietie Udoh is music maestro and Yamaha Ambassador, the multiple award winning producer and Jazz artiste Wole Oni. It will also feature Award winning singer Tosin Martins and WOMP Records signee, the female saxophonist in a class of her own, SaxGold.

A diligent, focused and resilient person, who holds a B.Sc. in Banking & Finance (University of Uyo); MBA in Marketing (University of Calabar); and a Chattered Insurer.

Her hardwork became the ladder that transported her to her present position as a Top Executive (General Manager, Business Development) at Standard Alliance Insurance PLC.

Furthermore, she is a golfer of great repute who has accomplished the “Hole-in-one” feat with over twenty six (26) trophies to her name. She has played both internationally and locally. She is also a member of Ikoyi Club (1938); Ibom Golf Club and Port Harcourt Club (1928).

Her love for music was kick-started when she was about ten years old as her mum encouraged her to function in her church choir then.

Subsequently, every phase of her life till date founded her further into different expressions of professional singing. Ranging from being in choirs – Assemblies of God, R.C.C.G. Daystar – to leading worship, releasing albums, ministering on air et al.

In the quest to actualize purpose and passion, and to be a source of hope and encouragement to many, she decided to put sound to the thoughts that God has been pouring into her heart. This birthed the decision to return to the studio and do what is expedient.

Now, she has picked up the mantle of blessing many with songs directly downloaded from God’s mouth into heart, there is no stopping her.

The first single off her album ‘God of Miracle’ was released in May 2018.